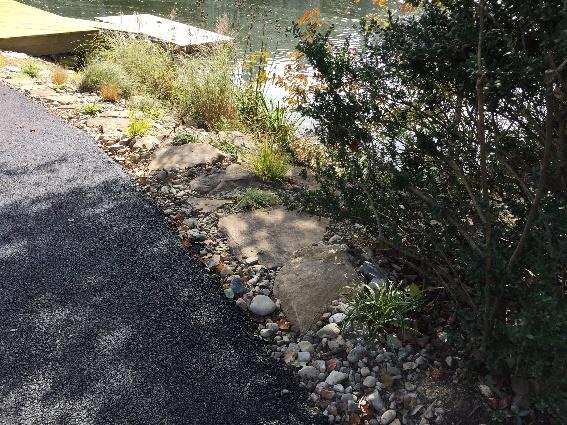 The “big project” in the last two months was dock-related landscaping, including a dry creek and new landscaping on the hill leading down to the west end of the dock and the installation of coir logs in that area to help restore the shoreline there (thanks to coir-log volunteers: Paul Renard, Kristen Bobik, Dave Fleming, Joe Powers, Andy Powers, and Diane Zoukis). Repairs were also made to landscaping areas damaged during the dock construction, including adding some new plants, rearranging ones that were moved for the construction, and redefining the beds.

Landscaping improvements weren’t limited to the area next to the dock, however. The hedge of Japanese hollies with canker that had become an eyesore was removed, and the ground in that area will be left fallow for a year before being re-planted. Another infestation, this time of spider mites, was removed in the adjacent hedge. Furthermore, tree removal/trimming addressed issues at the entrance and along the common area on the north side of Lakespray, and more trees that overhang Lakespray homes and Lakeport streets will be trimmed in December. Unfortunately, it appears we will have to continue to deal with dying trees over the next few years, in particular those along Sunrise Valley Drive.

Possible projects for next year include storm-water mitigation (which may be eligible for a grant from the Northern Virginia Soil and Water Conservation District), new landscaping where the cankerous Japanese hollies were removed, extra mulching, a repeat of grub treatment, other special maintenance, and of course, the ongoing tree work.

If you have suggestions for needed landscape maintenance and/or enhancements, please communicate them to Landscape Committee chair Carol Leos at leosc1@aol.com.

Posted by TMBarnett at 6:18 PM