Background Information on Proposed Changes in Governance to Be Voted on at Annual Meeting on September 25, 2019 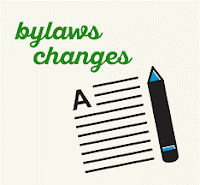 The Board will be asking owners to vote on the following three changes to governance:

1. Earlier this year, the Lakeport Cluster Association Board agreed on wording for a replacement to a Resolution passed in 1995 that appears as Appendix B of the Lakeport Handbook. The proposed resolution would allow Lakeport to pass on to the owner any administrative fees associated with processing delinquency letters as well as attorney fees that are not charged up-front to the delinquent owner by the attorney (one year Lakeport had to pay several hundred dollars related to processing delinquencies). When we sent our proposed resolution to the attorneys for review, we were informed that if over half of Lakeport owners approved a referendum allowing the Association to recover these fees, we could make this resolution an official governance document. The referendum, with language approved by the attorney, will be mailed to you in a month as part of the packet for the Annual Meeting on September 25 at the Reston Association Headquarters. When you receive the referendum, please vote and sign and date the referendum and send it to SCS by September 23. See wording below (but wait for the letter to vote).

2. Our attorney also helped the Board prepare an amendment to the Lakeport Bylaws that authorizes the Board to arrange for architectural inspections. Wording for this proposed addition to the Bylaws appears below. Bylaw changes also require “signed assent of a majority of all members without regard to residency”; so a vote on this proposed change to the bylaw change will be included on the same form as the referendum described above.

3. At last fall’s Annual Meeting, an owner who does not reside in Lakeport and instead rents her unit was surprised to learn that she was not allowed to vote because Lakeport Bylaws state that only owners who reside in Lakeport may vote. She requested that this restriction on who can vote be removed from the Bylaws; so a vote on deleting the current requirement in the Bylaws that owners be residents to vote (see text below) will also be included along with the two items above. FYI, currently 11 of the 82 homes in Lakeport are not occupied by their owners.


1. Referendum (which will be mailed with packet for Annual Meeting)


Recovery of Collection Costs
and Charges for Returned Checks

Description: If adopted, this referendum will permit the Lakeport Cluster to collect directly from any delinquent lot owner all actual costs associated with the owner’s assessment delinquency and any administrative charges related to returned checks. Under current state and federal laws, the current language in the Cluster documents is insufficient to recover all collection-related costs like the management fees associated with sending reminder letters to delinquent owners. These expenses prevent the Board from using your assessments for community-wide projects like improved landscaping, signage, and community events. This referendum is being proposed consistent with the language of Section V.5 of the First Amendment to the Deed of Amendment to the Deeds of Dedication of the Reston Association. This referendum requires the approval of 50% of all lot owners within Lakeport Cluster to be deemed approved. Once approved, actual costs associated with delinquent assessment accounts, as defined further below, will be considered a Limited Common Expense chargeable to the delinquent lot owner.


Personal Obligation for Assessments
and Costs of Collection and Returned Checks

Any annual or special assessment, together with late fees, interest, costs of collection, administrative charges, court costs, and actual attorney’s fees, shall be the personal obligation of the Owner of a Lot within the Lakeport Cluster at the time when the assessment fell due. Any administrative charge associated with returned checks shall be the obligation of the Owner at the time this charge is assessed. The personal obligation for delinquent assessments and for charges incurred by a returned check shall not pass to the owner’s successors in title unless expressly assumed by them. The Association may assess attorney fees, late fees, administrative charges, and court costs to the Owner of a Lot and declare such fees as a lien against the Lot and the personal obligation of the Lot Owner even if a lawsuit is not filed.

2. Proposed addition to Bylaws, Article V, Powers and Duties of the Board of Directors, Section 1. Powers:

Periodically arrange for inspections of the exterior of individual homes to ensure that Lots and structures are properly maintained in accordance with good property maintenance principles, including, but not limited to, issues relating to siding; trim; garage doors and carports; decks, patios, and entryways, including railings; fences; and gutters.  Owners shall be sent notices (including an expected completion date) for violations relating to needed maintenance and repairs, proper use of property, and where appropriate, violations of architectural design standards of Lakeport Cluster and Reston Association, in order to protect and enhance the value of homes and to maintain the community aesthetic in Lakeport Cluster.

(C) Only a member of the corporation residing in at least one of the dwelling units with respect to which he is entitled to vote, shall have the right to vote. For the purpose of this provision, an owner shall not be considered a resident of the dwelling unit if their driver’s license address differs from the unit address of a Lakeport Cluster unit which they own.

Posted by TMBarnett at 8:18 PM