Status of Construction Projects Near Lakeport

There are several construction projects near Lakeport that are nearing completion: 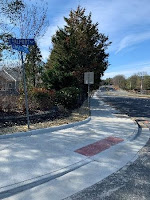 New sidewalk on Sunrise Valley Drive. The new sidewalk will be great for getting to the Metro station more easily, but as was pointed out in two announcements to the community, we need to increase our diligence turning into Lakeport from Sunrise Valley (especially going east when there’s a concern about being rear-ended by speeding cars behind us). So in addition to using your turn signal well in advance and slowing down in case you need to stop for pedestrians, we need to be aware that people may step into the entrance without looking for turning traffic. Several residents have already experienced this problem. We have learned from the County that they plan to paint two lines across our entrance area to mark a crosswalk, which hopefully will help increase awareness. They will also add a painted stop bar on the road at our exit, and we’ve asked for one to be added in the right-hand lane on Sunrise Valley Drive right before the entrance. A stop bar in that location will not only make it easier to get out during rush hour but also raise awareness of the entrance. In addition, we pointed out that the work crew had left a lot of dead branches and other debris, and they came shortly after our call to remove it so the area looks much nicer. Finally, we expressed our concern that the construction had cut roots in the easement area, which may cause some of the remaining trees to die, and they said they plan to send an arborist to identify any trees that are no longer viable so they can be removed. 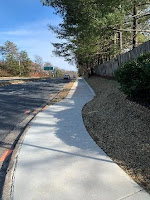 We want to make you aware of another potential safety hazard as a result of the new sidewalk. The area at the entrance to Upper Lake Drive that leads to the pool, which is in a valley between the two hills, now floods, creating standing water after a heavy rain, which may turn into ice when it’s cold. So be sure to exercise extra caution when driving there in icy conditions. The County is aware of this problem, but  a storm drain for that spot was not included in the plans, and funds are not currently available to add one.

South Lakes Village. The renovation of the South Lakes Village mall area near the lake is in progress. The plan calls for completion this spring, including the addition of new seating. It will be nice to have our access on the Reston trail down the hill open again and a much more pleasant area to sit and enjoy the view.

Silver Line Metro. The opening date for the extension of the Silver Line to connect Wiehle-Reston East Station with Dulles International Airport and Loudoun County keeps being pushed back. The latest estimates have service probably starting in 2021, although earlier is still possible. The rail yard, stations, and tracks will not be completed until the fall, but a problem with software will probably cause the biggest delay.

Posted by TMBarnett at 8:14 PM