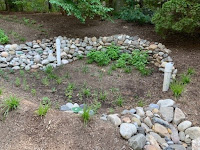 This past spring Lakeport completed a major project to address storm-water erosion starting between 11110 and 11112 Lakespray Way and ending downhill between 1952 and 1954 Lakeport Way. At the end of last year, the Board contracted with Adele Kuo at Deco Footprint to install a rain garden that redirects storm-water runoff from downspouts into a rain garden installed between the back of 1952 and 1954 Lakeport Way. This project not only reduces erosion down the hill and beautifies the area with plants and rocks; it also improves the quality of water in Lake Thoreau by preventing this surface water from running across a driveway, down Lakeport Way, and into a drain that empties into our lake. Because of the conservation aspect of the project, the County will reimburse us for 70% of the cost (the inspector wrote, “Everything looks fabulous”). 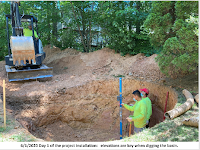 As you can see from the photo on the left, the rain garden started with a very large hole that is covered with a geotextile fabric, filled with gravel and amended native soil, and then planted with native vegetation and mulched. Supplementing the rain garden shown above is conservation landscaping along the hill above it to help retain soil. Below are before and after photos of the area that shows the impact of both projects.


Rain Garden Before and After 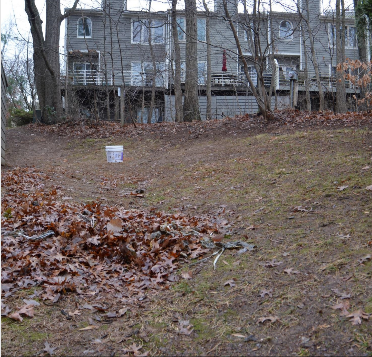 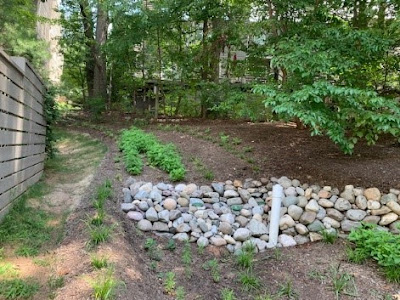 Conservation Landscaping Before and After 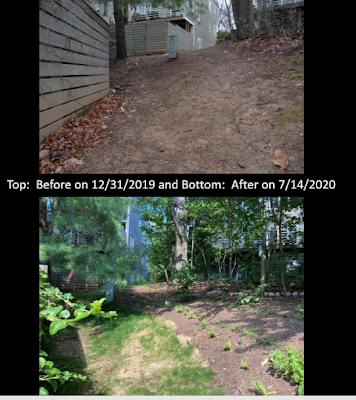 This month Riverbend Landscapes and Tree Service will be here to remove two trees: a dying Leyland Cypress next to the sidewalk on Sunrise Valley Drive (between the entrance and the fence) and one of the two Bradford Pears next to Triangle Park (the one with a large gouge out of the trunk). RA no longer allows Bradford Pears to be planted due to their brittle nature, and the weakened trunk made this one even more of a risk (in fact one of its large branches fell during a recent storm). Replacements for both trees will be planted this fall.

While they are here, Riverbend will also trim three trees (the other Bradford Pear, whose branches have grown across the path seeking light, plus two trees that have dead branches overhanging the parking at the south end of Lakespray, creating a potential threat to vehicles parked there). Please keep your eyes open for a request to remove vehicles from the parking area. In addition, Riverbend will treat the pin oak on the corner to the left of 1924 Lakeport Way and the large willow oak across from 1901 Lakeport Way to try to improve the health of these trees.

After Riverbend removes the two trees, we will rent a stump grinder. One of our new owners, Rich Shelton, has offered to grind the stumps of the two trees mentioned above plus a few others, and in addition he has said he’d be happy to grind stumps for owners as well. We were also fortunate to have a half dozen dead trees in the natural area next to Lakespray Way removed by an owner who requested to remain anonymous.

You may have noticed that we have had storm-water runoff eroding the side of the low hill next to the dock and covering up some of the rocks next to the dock. Riverbend will extend the downspouts under the rose bushes so the water no longer erodes the hill, and then this fall they will plant six new junipers to hold soil in place.

Other landscaping enhancements are also planned in the fall when the weather is cooler. We will install a new hedge in the median next to the RA path that runs along the brick wall near Safeway. This new hedge will replace a hedge removed the fall before last due to canker. In addition, liriope will installed along the sidewalk on the Lakespray hill to help mitigate the erosion there.

One final project will address problems that occurred when the County parked equipment on the hill to the right of the RA path leading from Sunrise Valley Drive to the Lake Thoreau Pool. The portion of the hill closest to Sunrise Valley is actually Lakeport property, and when the County parked there, it destroyed small trees and shrubs that had grown in this natural area. Fortunately, a photo taken by Melanie Clement, who lives at 1907 Lakeport Way, documented the equipment, and the County has agreed to install native landscaping this fall to start the restoration of the area.

Landscape co-chairs Melanie Clement and Gail Pitches will be walking around the community to make notes for future enhancements. If you have suggestions, please let them know by emailing Melanie Clement at melonieclement@gmail.com.

Posted by TMBarnett at 9:43 PM