Landscape improvements in the fall focused on replenishing trees and other landscape plants on common property that had died or were removed by arborists over the summer. 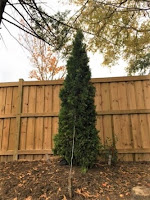 Meadows Farms recently planted a sweet bay magnolia (beside 2007 Lakeport Way), an American holly (near the Sunrise Valley fence behind 1938 Lakeport Way), and two redbuds (one behind 11121 Lakespray and the other behind 1954 Lakeport Way) to replace four live trees removed in July because they were deemed a hazard by the arborist (leaning toward a structure and for some, having very noticeable damage or dying). See photos at the bottom. They also replaced an arborvitae across from 1911 that died but was still under warranty (photo above). 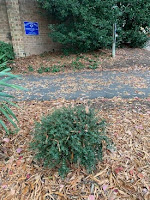 In addition, three Christmas ferns and five callicarpa (beauty berries) were planted on the hill between Sunrise Valley Drive and the RA path leading to the pool, replacing warrantied plants that had died there. Four dead holly bushes near the Safeway sidewalk (see photo to the right) and a dead juniper ground cover near the dock, all under warranty, were also replaced. 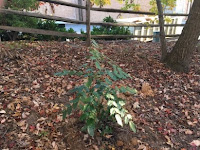 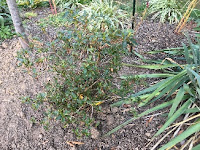 Lakeport’s Fall Workday included adding additional plants to common areas. Two donated azaleas (see photo on left) were planted near Triangle Park, three small rescued holly trees (see photo on right) were planted in the natural area near the Safeway access road, and another small evergreen (photo below right) was planted next to the turnaround at the end of Lakespray way. 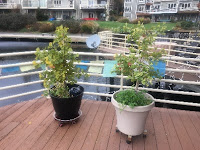 One last landscape project is planned for the fall. Thanks to the generosity of Elizabeth Pan, the two jade butterfly ginkgos shown to the left, which are dwarf varieties of the ginkgo tree  (described as “‘undoubtedly one of the most distinct and beautiful of all deciduous trees”) will be planted next the RA path leading from Triangle Park to South Lakes Village. 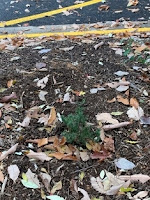 As described in the “Thanks to Volunteers” article, volunteers were identified to water all of these trees and plants. Because these plants are new (and some like the one on Lakespray, shown to the right, are small), please try to avoid walking (or letting your dog walk) near them. Thanks.

Finally, efforts to mitigate storm water damage continue. The landscape committee is working with NoVA Soil & Water Conservation District to develop a proposal that will qualify for a Conservation Assistance Program grant to install infiltration steps to supplement the capture of runoff in the rain garden and conservation landscaping installed in 2020

Posted by Lakeport News at 7:39 PM