Lights: The post light for one of our owners broke shortly before Christmas, but unfortunately the post light specified in our standard (Forecast by Lightolier) is no longer available. An application is currently being reviewed by RA’s Design Review Board to add the Kichler Camden as an alternative (as well as the almost identical Latitude Run Millbourne). See the proposed new standard below, which also reflects the decision made by the DRB in late fall that allows security lights on the front of homes (the only time they have allowed security lights in that location).

Last month Reston approved updates to two of Lakeport’s Architectural Standards that expand colors and products, resulting in many more options available to owners that do not require the submission of applications to Reston Association’s Design Review Board (DRB).

1. Wall lights shall be cylindrical (4.5”-5” diameter by 7”-7.25” tall), aluminum 120v light fixtures with a square mounting plate and be either bronze-colored, black, or gray. They shall be attached 7’ to 8’ above foot-level to outside wall/siding at the front and back entrances and/or beside garage doors. Applies to all units. Approved new lights: Kichler 9234BK (black) or 9234AZ (architectural bronze) or Progress P5674-31 (black), P5674-82 (gray), or P5674-20 (antique bronze). Existing fixtures that match this description but with a 4.75” diameter round mounting plate are also considered compliant if they are operating and in satisfactory condition.

2. Non-recessed ceiling lights shall be the same cylindrical design as the wall lights except for being attached to the ceiling over the front door (either flush or with a mounting plate) instead of to a mounting plate on the wall and shall be 4.5”-5” diameter by 6.5”-7.25” tall, aluminum 120v light fixtures. Approved new lights: Progress P5774-31(black), P5774-82 (gray), and P5774-20 (antique bronze). Applies to all units listed in the history section below.

3. Recessed ceiling lights (over entry-door and under balcony/deck overhangs) shall be 5”-6” in diameter, flush lens, white trim. Applies to all units listed in the history section below. Approved lights are available from a variety of manufacturers. 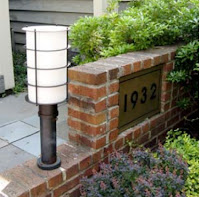 4. Post light shall be 16”–17” high (including sleeve) and 8” – 9½” wide, deep bronze or anvil iron finish and etched white opal glass, with a 2¾” sleeve at the bottom of the fixture that fits over a black 3” diameter post. It shall have a photoelectric cell in the post or be controlled by a light switch and shall use a warm white (2700 - 3000 Kelvin) lamp. For all Phase 2 end units with house numbers attached to a brick wall, this post light shall be mounted on a 3” diameter, 11” tall post attached to the low brick wall near the house number so that the total height is approximately 26”–27”. With the exception of 1925 Lakeport Way, other Phase 2 end units that do not have numbers on brick walls (1907, 1915, 1917, 1923 and 1983 Lakeport Way) shall have the pole light mounted on a 48”–54” high free-standing post next to the front entrance. Approved lights: Forecast by Lightolier # F8494-68 and Camden by Kichler post lamp (or alternatively the very similar but ½” shorter Millbourne Iron 1 by Latitude Run).

All existing exterior lights must be replaced with an approved light listed in this standard. If an approved light is discontinued or unavailable, the standard will need to be updated to identify a new option.

Security lighting should be selected and located to illuminate the owner’s property while minimizing glare onto neighboring properties, streets, or pedestrian walkways. The design, location, direction, and type of light bulb should reflect this goal.

All existing security lights must be brought into conformance with these standards when replaced.

RA Design Review Approval: No approval is required if these standards are followed exactly. Additional security or landscape lighting is restricted and may require Reston DRB approval.

THE FOLLOWING INFORMATION IS NOT PART OF THE STANDARD

IT IS PROVIDED TO ASSIST THE HOMEOWNER

History of Change to Standard / Current Situation: Original construction provided each house with standard decorative lighting (multiple standards applied to most units). The lighting standard was first documented and approved on April 18, 2005. The first revision was approved May 29, 2007. A second revision was approved September 7, 2021, when standards for security lights were added.

Wall light: Phase 1 homes originally had a white 5” x 5” square x 9” tall metal fixture mounted over the main entrance and white, 4.5” x 4.5” square x 9.5” tall plastic wall-mounted fixtures at other front and rear deck locations. All Phase 2 construction had cylindrical lights with specifications described above, except with round mounting plates instead of square plates. The standard approved in 2005 specified that all wall fixtures should be cylindrical lights with specifications described in the current standard, except with round rather than square mounting plates, and owners of Phase 1 homes were given until December 31, 2008, to replace their original wall fixtures with wall-light design used at that time for Phase 2 homes. The 2007 revision to the light standard specified that wall lights be as described above except it allowed only square mounting brackets and only the bronze color.

Note: This list should be considered a starting point for homeowners replacing outside lighting. No endorsement of any supplier is intended.

Posted by Lakeport News at 6:39 PM