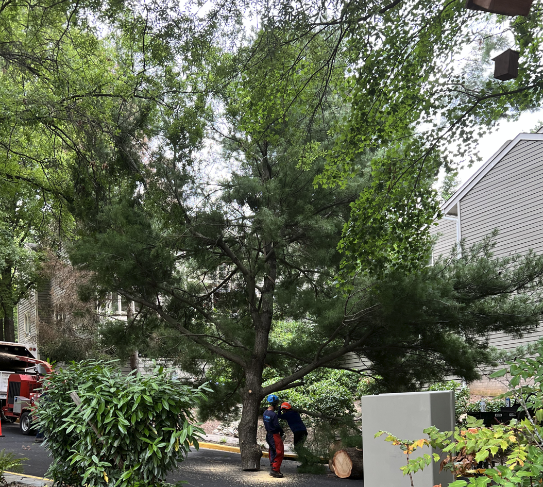 Despite the heat, landscaping efforts have continued through the summer. Lakeport’s Fall Workday will be the morning of Saturday, September 17 (coffee and bagels will be provided at Triangle Park at 9:00 a.m.). Volunteers will help collect dead branches and trees (cut down by our resident lumberjack Rich Shelton) for Blade Runners to haul away. There will be other projects, including trimming bushes. Please mark your calendars, email msapp@miami.edu to volunteer to participate, and join us to further beautify Lakeport as part of “I Love Lakeport Day” (see separate article for more details, including information about the dock party that evening).

Riverbend Landscaping and Tree Service removed two live trees that were deemed hazards and three dead or nearly dead trees, and they trimmed four others. While they were here, they also removed two hazardous white pines on an owner’s property (see photo showing the entire top of one of the pines sitting on the road!). In addition, they ground the stump of the large willow oak at the south end of Lakeport Way. As shown in the photo on the left, volunteers spread mulch from there on the row of bushes next to the RA path between 1985 and 1999 Lakeport Way and on liriope next to the fence by the RA path going to the South Lakes Village dock. 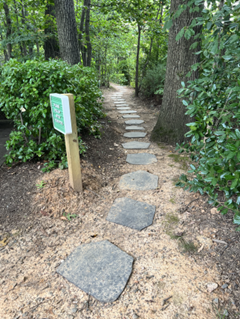 Summer landscaping enhancements included projects on Lakespray Way, where Meadows Farms planted seven viburnums to the right of the mailboxes to help screen South Lakes Drive and also installed steppingstones on the dirt path between the end of Lakespray and the access road to the back Safeway parking lot. In addition, they installed two Twist Encore azaleas near the dock (one paid for by Clarence Delaine—thank you, Clarence!). 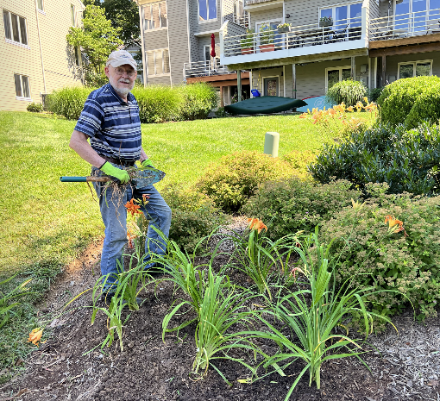 Volunteers also added new plants. A number of tiger lilies that had been beside the Lake Thoreau Pool (which would have been destroyed by the renovations there) were transplanted to four areas across the RA path from the dock and also on the hill next to the entrance parking. Mulch from the stump grinding of the two pine trees was added to these areas, and nearby neighbors were recruited to water them.

Because all of these plants are new, they need to be watered in order to get established, especially in light of the high temperatures this summer. Please read the Ripples article listing volunteers who have agreed to water, plant, mulch, and make other contributions so Lakeport will be more attractive.

On August 9, RA’s Design Review Board approved a storm-water mitigation project to install two catch basins and two biologs near 11100 and 11112 Lakespray Way to mitigate water flow down that hill. A revised grant proposal was also approved by the Northern Virginia Soil & Water Conservation District to fund 80% of the cost.

Posted by Lakeport News at 9:38 AM