Lakeport’s Fall Workday. Over 20 residents turned out on “I Love Lakeport Day” to haul a dozen dead trees cut down by Rich Shelton and Tod Vollrath plus other brush in Lakeport’s natural areas to a pile on Lakespray so Blade Runners could haul it away. In addition, the bushes next to 11110 Lakespray were trimmed in preparation for the storm-water mitigation project described below, and ferns were transplanted from between the RA path to the pool and Sunrise Valley Drive. As a result, Lakeport’s natural areas now look much better.

New landscaping near the Safeway sidewalk. During the past year almost all the bushes planted a couple of years ago at the south end of the area between Lakeport Way and the RA path that leads to South Lakes Village had died (including some replacement plants installed last spring). After considering several options, the decision was made to switch to something that wouldn’t have to be replaced in the future or need much maintenance or watering once it was established. Five large landscape boulders were installed by Meadows Farms, and almost 500 liriope spicata (which are evergreen, flowering, and most importantly “indestructible”) were planted by volunteers, which saved half the cost of the project. The three remaining live bushes were transplanted into the north section of the median to replace dead bushes there. Please avoid walking on this new liriope and instead use the RA path or the steppers. 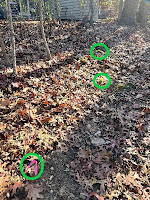 Trees. Meadows Farms installed an emerald green arborvitae across from 1999 as a replacement for the huge willow oak that was removed earlier this year and that had grown too large for the enclosed area where it had been planted. They also planted a rhododendron next to the turn-around on Lakespray as well as a red maple, American holly, and witch hazel between back fences of Lakeport and Lakespray homes. The latter are part of the Landscape Committee’s effort to replace trees that have been dying in these areas. Still to be done are the removal of a large red oak behind 11108 Lakespray that was deemed a hazard due to decline and a dying spruce behind 11120 Lakespray, and their replacement by an American hornbeam and a green giant arborvitae, respectively.

In addition, volunteers planted free seedlings from https://fairfaxreleaf.org/ as replacements for three trees in the wooded areas next to Lakespray and seedlings for six more trees and nine shrubs between fences behind Lakeport and Lakespray. As the photo to the right shows, these seedlings are very small and hard to see, especially amid the leaves, but they’ve been marked with yellow or pink ribbons. Please look carefully if you walk in one of these two areas and avoid damaging them. 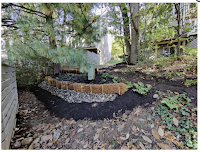 Stormwater mitigation. A new stormwater damage project was installed this fall consisting of two biologs donated by Reston Association (as they did with biologs used to retain the shoreline to the right of the dock). Native plants were put in behind the biologs to trap water running down the hill, and two catch basins were installed uphill from the biologs to redirect uphill water that had been eroding both common and private property. Lakeport received a Conservation Assistance Program grant from the   Northern Virginia Soil & Water Conservation District that paid for 80% of the cost of this project.
Posted by Lakeport News at 6:09 PM