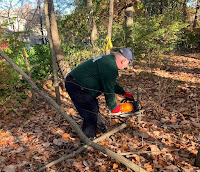 We removed 44 dead trees from the woods along upper Lakespray Way plus a large one on the Lakespray hill (see photos to the right of the tree trunk being lowered and then carried off) and trimmed dead branches from six large pines between Lakeport and Sunrise Valley and others near Lakespray. 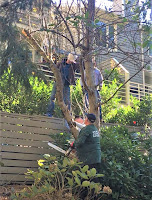 We also cleared a large amount of fallen dead wood that was a fire hazard behind Lakespray and Lakeport (see photo at bottom, of only one of four such piles).

Our landscaper, Blade Runners, agreed to chip the four large piles of cuttings at no cost to us when they do tree maintenance soon. With an average commercial cost of $100 per tree cut, plus the cost of trimming and deadfall removal, we saved the Association nearly $5,000 in one morning! Although there were a few sore backs and two chainsaw blades that need sharpening, we made Lakeport more attractive while having fun with our neighbors. 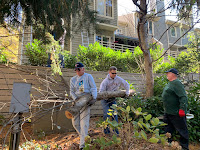 Join us for service and comradeship in the spring when we do more clean-up.

Posted by TMBarnett at 8:48 PM