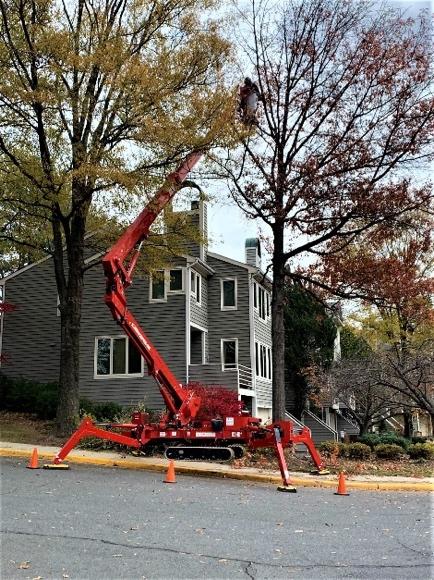 Our thanks to two residents who have volunteered to co-chair Lakeport’s Landscape Committee: Gail Pitches and Melanie Clement. We also appreciate the willingness of Carol Leos to fill this position for the past year and a half.

Normally late fall and winter are down times for landscaping, but we were able to accomplish quite a bit at the end of 2019.

Tree-trimming along Lakeport Way and up the Lakespray hill was the most obvious project. We rented a “crawler” and the Blade Runners crew to operate it for a day to save the cost of paying to have each tree trimmed separately. The crawler looks a bit like an over-sized spider but is effective at reaching tall branches. The crew also did trimming the old-fashioned way by climbing up into the trees using ropes. In addition to trimming branches that were dead or an impediment to trucks on Lakeport roads, a hazard tree that was deemed to be a threat to a nearby home was also removed.

We have started the process of planting replacement trees (with an emphasis on flowering trees when they are planted in the sun and on evergreens when trees are planted behind homes under existing trees so they can screen year-round). Two flowering native white fringe trees and two new American hollies were planted late last year, and native ferns were also put in to replace invasive English ivy removed earlier. In addition, river rock was added near the dock to enhance that area, and the retaining wall at the end of Lakespray, installed to block the view of Safeway, was repaired.

Lakeport has several areas that show the effects of storm-water runoff in terms of barren soil and runoff into Lake Thoreau. Thanks to owner Marilyn Bursch, who alerted the Board to the Conservation Assistance Program administered by the Northern Virginia Soil and Water Conservation District, we applied and were approved in January for a grant that will pay three-quarters of the cost of a storm-water mitigation project to install a rain garden (which Marilyn has volunteered to maintain, a requirement of the grant) and conservation landscaping, all using native plants (another requirement of the grant).

This storm-water project will be one of two major 2020 projects to enhance landscaping in Lakeport. The other will be planting new landscaping, including an evergreen hedge, in the area next to the RA path leading from Triangle Park to South Lakes Village.

Blade Runners’ annual maintenance will begin soon. If you note any area that needs extra attention by Blade Runners when they are here, or if you have suggestions for landscaping improvements, please pass them on to the new committee co-chairs (their contact information is in the Lakeport Directory) or the Board.

Posted by TMBarnett at 7:18 PM