This year’s Easter Egg Hunt was enjoyed by both young and old. Despite competition from sports practices, participation was good, motivated hunters were aplenty, and lots of candy and some very cool prizes were taken home. The primary “Bunny Marshalls” were Brian Dryzga, Tanya Coogan, and Ashley Strickland. With some additional help from Deputy Bunny Marshalls Bonnie and Mary Coogan and Mary Frank Strickland, something like 100 eggs were loaded the night before with candy or coupons for prizes that were claimed at Triangle Park after the hunt. At 9:00 a.m., Ashley and Chuck Foster hid the eggs, and the hunters gathered in Triangle Park for the 10:00 a.m. start.

Ashley attempted to give a head start to anyone 5 or younger, but the one hunter who took advantage of the opportunity appeared unsure of where to go. A moment later, Ashley unleashed the hounds, with kids sprinting in all directions. The speed at which the hunters worked was quite amazing. One observer noted that the first round of the hunt lasted 14 minutes flat. The kids were super-efficient! It was a great community event and we look forward to next year’s hunt!

Many thanks to James Pan, Rich Shelton, Rich and Linda Rosenberg, Tanya and Robert Coogan, Brian Dryzga, Ashley Strickland, and Chuck Foster for donations of candy and prizes. 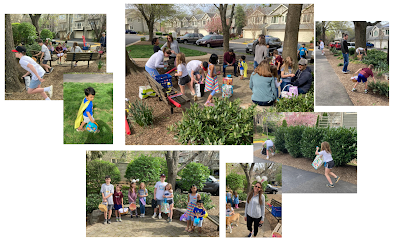 A little more than a month after Russia invaded Ukraine, cluster residents gathered at the south end of Lakeport Way to express solidarity with the people of Ukraine. Despite periodic bouts of rain and snow, low temperatures, and a relentless March wind, many attended and stayed to contemplate and discuss the plight and courage of the Ukrainian people. Many thanks to the volunteers who made this event possible: Chuck Foster’s band for three hours of classic pop and rock music; Joerg Dronia and Jeanette Malin-Berdel for tables; Rich Rosenberg for a list of options for charitable donations; Bobby Chan for a recycling bin; Kathy Babbitt for help with the setup and drinks for the band; Shelby Friedel for organizing the volunteers and providing drinks; and Liz Blankespoor for face painting for children and adults.