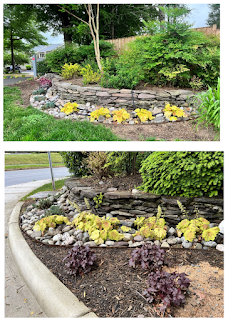 This spring we have seen lots of residents sprucing up their landscapes, and Lakeport’s Landscape Committee (with help from residents) has been doing the same for our HOA areas by replacing plants that have died, filling in gaps in existing landscaping, and otherwise enhancing the beauty of our community. In addition, we have regrettably had to remove some hazard trees, we have trimmed some others, and in the fall we will plant new trees to take the place of those that have been removed or died.

Entrance plants that died last year have been replaced with colorful heucheras. The photo above shows landscaping next to the entrance lane on the west side (the five golden heucheras on the right plus the three pink ones on the left are new; the rest are existing). The second photo shows landscaping next to the exit lane on the east side (the five golden heucheras in the center are new, and the rest are existing).

In addition, several new plants have been added near the dock. Owner Carol Leos graciously offered to plant three red rose bushes to brighten the landscaped area next to the short leg of the dock, and seven new junipers have been planted to reduce erosion next to the long leg of the dock. In addition, owner Clarence Delaine kindly offered to pay for one of the new azaleas that will be planted in June to shield the view of a transformer under the cherry tree a little uphill from the new rose bushes.

Residents will also notice some additions along Lakespray Way. The row of liriope on the Lakespray hill has been filled in, which will help even more to combat erosion. In addition, a new hedge of seven viburnums will be installed in the gap to the right of the Lakespray mailboxes to help screen South Lakes Drive, and the walk along the dirt path to the access road to the back Safeway parking lot will be more pleasant thanks to the addition of 26 large steppingstones to avoid the mud when it rains. At the south end of Lakeport Way, we arranged to replace one of the holly bushes that had died, and another generous owner, Gil Blankespoor, planted two additional bushes to replace two that were failing. Rounding out the new replacement plants are five ferns that have been helping to slow down stormwater next to 1952 Lakeport Way, and a holly tree at the top of the hill behind 1938 Lakeport Way (some of the ferns and the holly tree were under warranty). See photos below.

Because all of these plants are new, they will need watering through the summer to get them established, but thanks to volunteers Marilyn Bursch, Clarence Delaine, Henryk Gorski, Pete Hatfield, Carol Leos, Paul Renard, Mary and Stephen Sapp, and Rosemary Welch, we won’t have to spend your assessment fees to pay for commercial watering to keep these new plants alive. Instead that money can be used in the fall to add some trees in wooded areas behind homes or near streets and perhaps other landscaping.

Unfortunately, we continue to have to do major tree work, including the removal of three live trees this year. Most obvious is the huge willow oak as you exit Lakeport on the RA path leading to the South Lakes Village dock. Although we tried to prolong the life of this oak by injecting it with a growth regulator, two certified arborists told us that a fungus that appeared on the roots means it was dying and posed a danger to nearby homes. It was removed Friday morning, shortly before the storm and tornado warnings (see photos of that impressive process below).

In addition, a black cherry in the wooded area next to 11121 Lakespray Way is leaning toward that home, also posing a risk. The cryptomeria in front of 1907 Lakeport Way—although not a risk—will be removed for esthetic reasons since it is almost dead.

While the tree contractors are here, they will also remove a dead double-stem hemlock across from 1913 Lakeport Way and trim branches on three black locusts next to the path to the RA pool near Sunrise Valley Drive, in addition to a willow oak encroaching on the roof at 1930 Lakeport Way.

Thanks to Rich Shelton, a dead trunk next to the lake has been removed and branches that were hanging too low over Lakeport Way have been trimmed so trucks can pass without hitting them. A half-dozen other dead trees have been identified for Rich to remove in the fall, but we’ll need volunteers to haul the debris into a pile for Blade Runners to haul away (part of our maintenance contract). Therefore, we are scheduling Lakeport’s Fall Workday for the morning of Saturday, September 10 (coffee and bagels will be provided to volunteers). Please mark your calendars to join us to further beautify Lakeport. 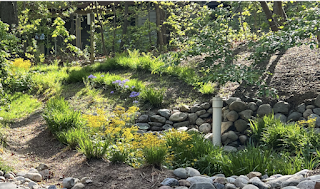 As we all know, Lakeport’s hills create stormwater runoff that causes mud and erosion on owner and common property and dirty runoff into Lake Thoreau. To try to protect the quality of Virginia waters, the Northern Virginia Soil & Water Conservation District (SWCD) offers grants to help HOAs and individual homeowners fund projects to deal with this problem. Lakeport received grants in 2020 to install our rain garden and conservation landscaping between 1952 and 1954 Lakeport Way, which have successfully captured runoff from the roofs of three nearby homes (see photo to right).

Unfortunately, surface-level runoff is still causing erosion between 11110 and 11112 Lakespray and mud between 1952 and 1954 Lakeport (even after those owners paid to install rock steps so they could safely reach their back patios). Based on advice from Dan Schwartz, whose job at the NoVA SWCD is to provide advice on dealing with stormwater, and contractor Adele Kuo, who is certified by the Chesapeake Bay Landscape Professional Certification program for “stormwater best practices,” the Board has decided to mitigate this second source of runoff by installing 1) two catch basins to help prevent ongoing erosion between 11110 and 11112 Lakespray from groundwater flowing from near Lakespray Way, and 2) two biologs (similar to those installed in 2019 along the shore) to reduce water flowing down to 1952 and 1954 Lakeport Way. We are happy to announce that our proposal for a $3,500 grant was recently approved by the NoVA SWCD. Installation is contingent on approval by RA’s Design Review Board.

Note that if you have stormwater issues, you might want to investigate applying for your own grant from NoVA SWCD to fund one of their best practices (e.g., a rain barrel, conservation landscaping, or a dry well). See https://vaswcd.org/vcap for more details and links to eligible practices.

Photos of removal of large willow oak at the south end of Lakeport Way on Friday, May 27

Early Friday morning, cars were moved from near the willow oak before the trucks from Riverbend Landscape and Tree Service arrived at 7:40 a.m. After setting up, the work crew started removing large limbs at 8:00 and putting them in their chipper. Here is the sequence: 1) the crew member in the tree tied a strap (connected to a crane) near the top of the limb, 2) he sawed off the limb, 3) the crane lowered it to the ground, 4) other members of the crew directed the limb to the chipper, sawing off smaller branches as necessary, and 5) the chipper emptied the wood chips into the truck.

In these photos, the top half of the tree is 1) being lifted up and 2) then lowered so smaller branches could be cut off to 3) go into the chipper.

Here the bottom of the trunk is being 1) removed and 2) lowered (notice the size of the trunk relative to the crew member below it; it was 5’ in diameter); then 3) the crew loaded the five main sections of the trunk into a truck and cleaned up the debris (all by 9:30 a.m.!). 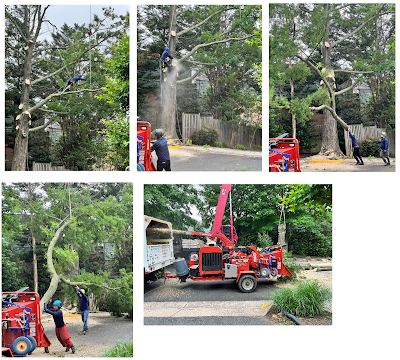 Photos of new plants (more will be installed in June):