Lakeport’s major landscape enhancement this year is a new hedge by the path to South Lakes Village to replace the one removed last fall because of canker. We obtained an initial proposal from Blade Runners for ground cover only, but after receiving feedback from neighbors living nearby, we approved a revised proposal that includes an evergreen hedge of native inkberry bushes plus lilies. Thanks go to Gil Blankespoor, who has offered to water these new plants after they are installed in the fall, and to Lynda Dendtler, Sharon Corriveau, Marcy Foster, and Kathy Kelly, who have volunteered to provide Gil access to their water to help get the new plants established.

We also appreciate others who are watering plants on common property to help them make it through the hot summer days:


In addition, participants in our Spring Workday included the following volunteers, who removed several bags of English ivy that had been damaging an owner’s back fence and also raked and cleaned up an area between Lakeport Way and Lakespray Way: Elena Simonenko, Terrill Evon, Rosemary Welch, and Mary Sapp. We have arranged for Blade Runners to finish the removal of the English ivy (plus nearby poison ivy they identified) and to plant some native ferns to stabilize the soil on the hill where the ivy is removed.

An unavoidable part of Lakeport’s landscape efforts each year for the foreseeable future will be removing dead and dying trees. Five trees have been identified for removal this year, including one of the white pines next to Sunrise Valley Drive and a second in a different location, both of which arborists have determined to be threats to nearby homes. Two other pines on Sunrise Valley died and were cut down last year, but unfortunately there are 15 others that are at the end of their lifespans and will need to be addressed in the future. White pines cost $850-$1000 each to remove, and large oak trees cost $1K-$1700 each. The price for the five trees on the list this year (even after being granted a discount for having the work done in an “off time”) is $5K; so you see why the Board is concerned about the impact of removing dead trees on future budgets. Each year, if there is a surplus at the end of the year, we use it to trim additional trees on the list so they won’t have to be done following year.

Lakeport has also recently been working on two efforts to help our lake: 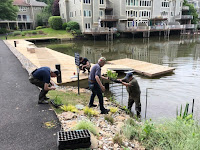 Committee chair Carol Leos expresses her appreciation to all the neighbors who work together to keep Lakeport one of the best clusters in Reston.

Posted by TMBarnett at 7:46 PM